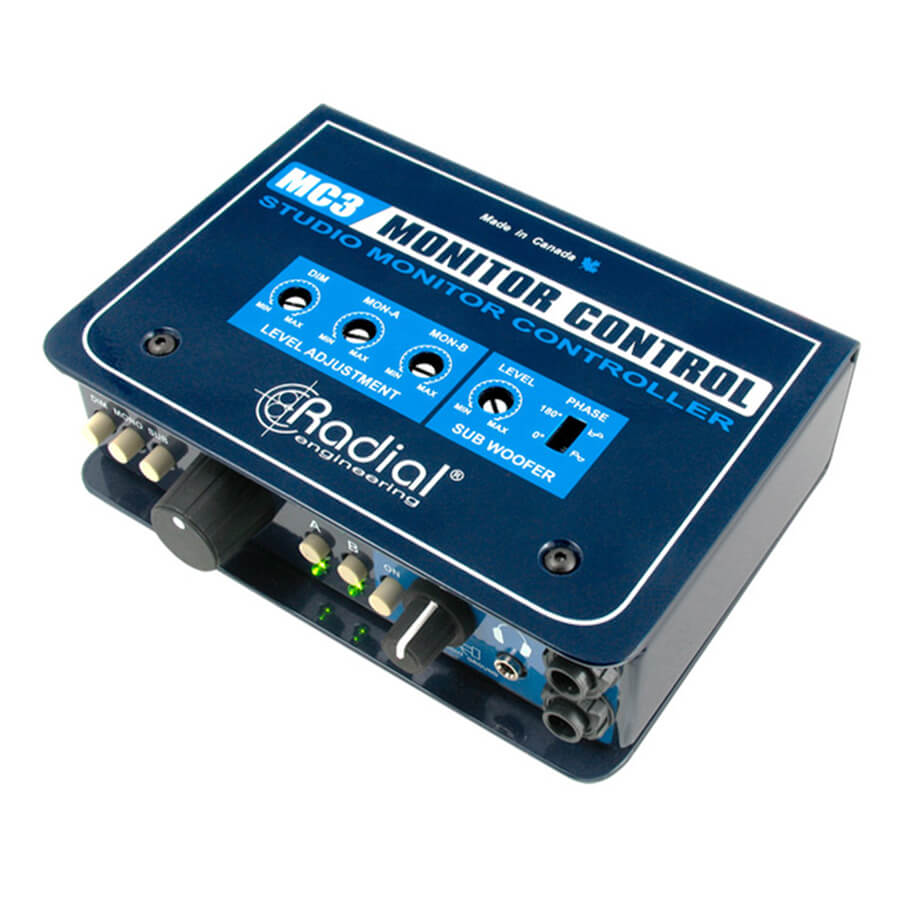 The Radial MC3 monitor controller is a studio tool that enables the engineer to quickly select between reference monitors, subwoofer or headphones and compare how the mix translates via various playback systems. Unique to the MC3 is the ability to quickly sum mono for AM radio compatibility.

And while most monitor switchers are active, the MC3 is 100% passive. This means that unlike active switchers that introduce a buffered electronic circuit in between your recording system and monitors, the MC3 delivers straight wire performance. This eliminates coloration and distortion for more accurate monitoring.

The MC3 features an easy access level control that lets you quickly set playback levels on all speakers. Each output is equipped with a top-mount 'set & forget' dial to fine tune outputs for the ideal balance. The sub is augmented with a 180 degree polarity reverse to help deal with room modes that may cause a frequency bump in the mix position. A separate Dim switch is also adjustable to enable the engineer to temporarily drop the playback level without affecting the mix level settings. To address the ever increasing popularity of ear buds, the Radial MC3 is equipped with a built-in headphone amplifier with stereo 3.5mm (⅛" TRS) output along with two standard ¼" headphone phone outs to share. The MC3 may be configured for either balanced or unbalanced setups.

The Radial MC3... passive, simple and effective monitor control for the masses!

Using the MC3 with 2 sets of monitors

The most common application is switching between two sets of monitors. This enables the engineer to hear how the mix will translate at various levels using different sized drivers. The mono switch is used to check AM radio compatibility.

Adding a sub to the playback

With more and more home theaters using subs, it is important to audition mixes with and without the added bass. The MC3 lets you switch in a sub as needed. Top mount dials let you adjust the level going to the sub for optimal mix.

Using the MC3 as a router

The MC3 can be used as a basic audio router for applications such as sending a stereo signal to two rooms. Applications include splitting the signal between the living room and kitchen or two zones in a restaurant.