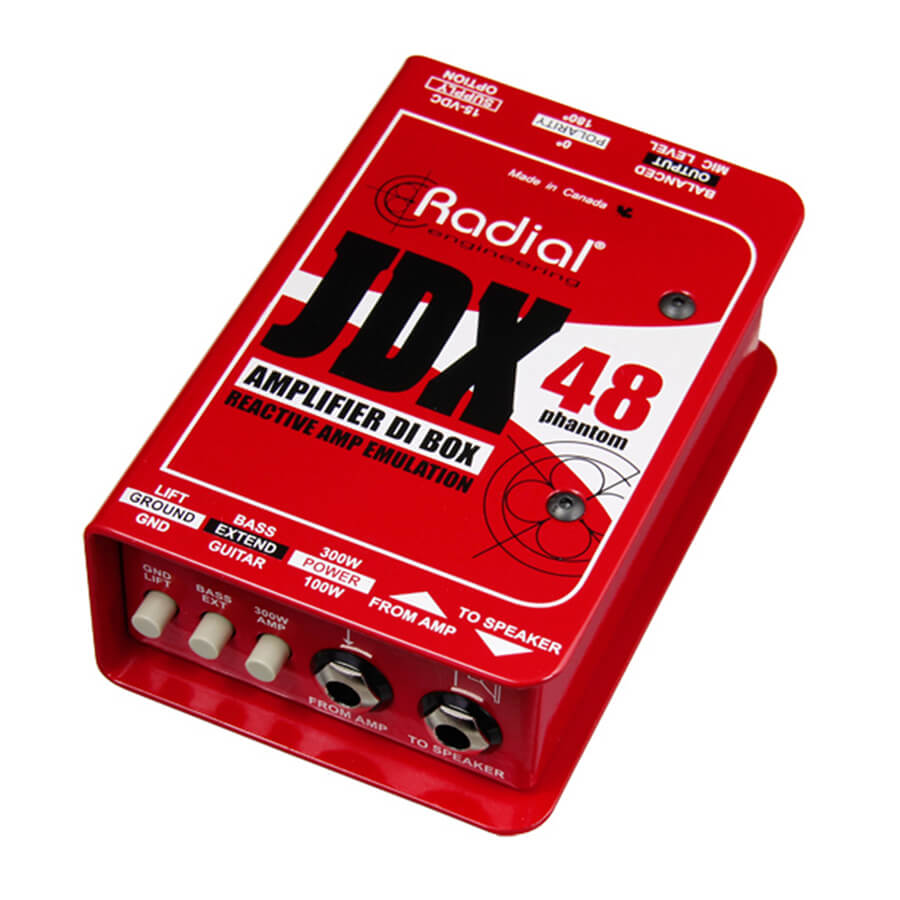 The Radial JDX 48 Reactor is a direct box designed to capture the explosive dynamics and warmth of an electric guitar amplifier by connecting between the guitar amp head and speaker cabinet. This delivers a sound that is similar to a well-placed microphone while eliminating the frustrating inconsistencies.

The design begins with 100% discrete class-A circuitry and a transformer-coupled 'reactive load' that captures both the sound from the amp head along with the back electromagnetic impulse from the loudspeaker. This produces a more realistic rendering than the usual resistive pad offered by other manufacturers. The signal is then processed via a carefully designed multi-stage filter to emulate the tone of a 4x12 half stack cabinet.

In use, the JDX 48 delivers greater consistency over a typical microphone as irregularities such as mic placement and varying acoustics no longer play the dominant role on stage. This is most appreciated when using in-ear monitors as the tone remains consistent from one show to the next, resulting in shorter setup times and a more comfortable audio feed for the artist.

Although originally designed for guitar, the JDX has also become a favorite on bass. The clarity and punch in the lower midrange delivers a tone that is reminiscent of an Ampeg SVT connected to an 8x10 cabinet. On guitar it sounds as if you have a Shure SM57 in front of a Marshall half-stack. This new version also offers greater power handling for 300 watt amps and extended low end for deep bass frequencies.

The JDX 48 Reactor… the most natural sounding amp DI ever!

Using the Radial JDX 48 on guitar

Using the Radial JDX 48 on bass

Bass guitar sounds amazing with the JDX! You get a fat low-mid punch and extra clarity that makes the bass stand out. It truly sounds like you are playing through an SVT with all the grind and drive… yet it is coming through the PA.

Using the JDX 48 with a mic and the Phazer

For even more fun, combine the direct sound of the JDX with a microphone. Use the Radial Phazer to time-align the two signals and be prepared for the biggest, fattest, most amazing tones ever. Careful… this is addictive!